Hasegawa was born in 1947 in Komatsu, Ishikawa. He won a number of awards including the Television Commercial Highest Award of NAB Japan (The National Association of Commercial Broadcasters in Japan). He made thousands of productions including “Wind of Ryukyu” period drama of NHK (Japan Broadcasting Corporation), NHK news, a logo of CCTV (China Central Television), etc.In 1995, he invented sensitizing instrument D-K (Digital Kakejiku), based on Japanese spirit of transience. Since then, he has been performing D-K and asking where the spirit is to modern society where the spirit is disappearing. D-K was devoted over 90 places around the world including Japanese famous castles, Uji bridge in Ise Grand Shrine, the Acropolis in Greece, China Shanghai International Arts Festival, ZERO ONE 2006 Art Festival in San Jose, United Nations Headquarters, etc.In 2003, D-K was featured in ARTIS magazine (Amsterdam), and was named as “quantum art”, an art which transcends a single art. He was elected to the best artist of American public art 2007 and introduced in Japanese high school text “Information Science C”. Now he is 62 years old, and his journey of dedicating D-K goes on. 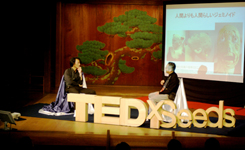 Mirrors of human – beyond the theory of Robotics [SEEDS Dialogue] 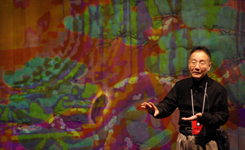