Born in 1971, graduated from Shibaura Kougyou University. He received Masters Degree from Tokyo University of the Arts. From 1994, he started to study Geometric Theory. He moved from VMX Architects and Sasaki Structural Consultants (now Sasaki and Partners / SAP) one another and finally established his own company, AuthaGraph corporation in 2009. In the same year, he participated in Open Space 2009, and its theme was Mission G: Sensing the Earth. His presentation was the world map using AuthaGraph and it was first time to give a presentation in the event. His major study, AuthaGraph is based on authalic(equal area) and graph. His presented very creative mapping using actual ocan and land area ratio without dividing two different aspects. Currently, he is expanding and exposing his idea using three-demensional geometric verification. Also he is searching how he can use his ideas in society. His major fields are Design and Engineering. In June, 2012, he was in charge of project manager on Geo-Cosmos, Geo-Palette, Geo-Scope which is located in National Museum of Emerging Science and Innovation. He has received many awards: Japan Institute of Architecture/first prize(1994) for “Theaters on Rooftops”, Salon de Printempts prize(1996). He is a member of Japan Cartographers Association and an Assistant Professor at Kuwasawa Design Laboratory, and Tokyo Zokei University. He also is an advisor at National Museum of Emerging Science and Innovation. 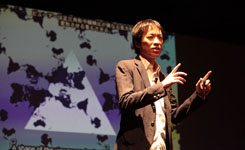 An endless world map: Viewing the world through “Authagraph”