Born in 1974. He moved to the U.S. in 1994. While he was enrolling at Bridgeport University, he started hip-hop dancing. Since then, he was into dancing and learned Poppin', Lockin', House, Jazz, Pantomime, folk dance etc...by himself. In 2001, he won over-all annual champion in dance contest, Amateur Night held in Apollo Theater in Harlem. In 2007, he was a champion for 7 years in TV contest called “Showtime at the Apollo” and that made him a star. He was a first dancer to win both awards in Apollo Theatre. In the same year, he was invited to the TED Conference and performed in Monterrey. His performance is mostly related to dancing however he is adopting various tools such as videos and illusions to establish his original performance. His goal is to entertain as many people regardless of ages and genders. He took part in special events of cirque du Soleil, Disney Caribbean tour shows, also he actually was invited to private event that was held by Madonna and Morocco royal family. Other than that, he is seen in many TV shows as well. His nickname EBIKEN is known in the world. His activity is mostly in New York and currently performing regularly in exclusive clubs where many celebrities visit to enjoy their private time. 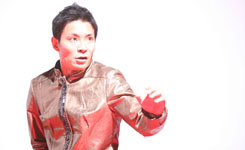