Kongo Gumi is the world’s earliest professional group of temple/shrine carpenters, established at Shitenno-ji, Osaka, in the Asuka period (Japanese era from 538 to 710 A.D.). Kongo Gumi, at its 1,400 anniversaries, has its origin back in the end of 6th century in the Asuka period. By Prince Shotoku Taishi’s command, three carpenters were invited from Paekche to build Shitenno temple. Shigemitsu “Kongo”, leader of the carpenters in the construction, was the first master carpenter of “Kongo” Gumi. Since then, having going through numerous challenges and crises for the past 1,400 years, they have carried on the mind and technique in building wooden temple and shrine. Besides its capacity of building temple and shrine, their technique rewarded as Japanese historical heritage is still embedded in the construction method called “Kumiage Koho”. They continue to develop their original technique of expressing the beauty of Japanese buildings and warmth of wood under diligent work from beginning to end.Their buildings in Tokyo area are not only a number of temples and shrines but also others including Koubun Tei in Kairakuen, one of the three biggest gardens in Japan. Hopefully Kongo Gumi, consisting of eight groups all over the country with 110 carpenters, succeeds beauty of Japan to the next generation and contributes new form of Japanese buildings. 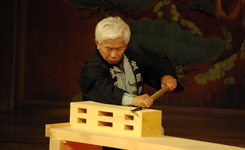