Born in 1957 in Fukuoka Prefecture. Graduated from Keio University’s Graduate School of Engineering in 1984 and entered Sony Corporation in the same year. Through the company’s overseas study program, went to the United States to study at California Institute of Technology’s Department of Electrical Engineering. Developed such Sony hit products as the “VAIO” personal computer, the “Sugoroku” HDD DVD recorder, the “CoCoon” television channel server and other major products. After resigning from Sony in March 2006, joined Google in 2007 and was appointed president of Google Japan in January 2009. Played a key role in Google’s growth in the Japanese market. Resigned in April 2010 to establish ALEX Corporation with like-minded members. Currently serving as representative director, president and CEO of ALEX Corporation. Wrote the book, Everything Google Needed I Learned at Sony (Shinchosha, November 20, 2010). 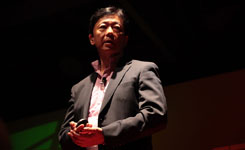 How to open up the possibilities in your life