Born in 1957. She worked at Asahi Television from 1979. She was a director and a producer for popular news program such as "News Station" and "The Scoop". In 2000, she took part in Editors Department and Contents Business Department, and was responsible for cross media deployment. Meanwhile, she studied Mass&Communication at Tokyo University and received Master and Doctorine there. Her interest mainly is Japanese Tea Celemony that she started 3 years ago and it was a turning point to rethink how Japanese culture can be connected to modern media. 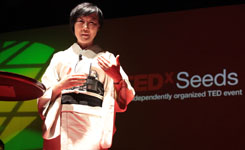 Invitation to a new, media-oriented view of Japan