NPO Save this Blue Sea for our Future Generations

Saito was born in the 29th of April 1930. He was bombed to an atomic bomb in Hiroshima on the 6th of August 1945 (at age 15). He received his B.A. in political science at Keio University. He nurtured many actors and actresses, including Midori Isomura, through his work in the advertisement section at Tsumura Juntendo Co., Ltd. During his work at The Yokohama Institute for Municipal Research, He made "Yokohama Dontaku", the first Yokohama Port festival. Since then, he made a variety of marine events nationwide such as the Marine Festival of Minatomirai 21 on the 100th anniversary of Yokohama municipal government. He has been the leader of "Save the Clear Blue Sea for the Future" - a volunteer group in the 4th Regional Coast Guard Headquarters for 30 years. And he is also a manager of Blue Feather Fund - relief fund for marine rescue. In July 2009, he established nonprofit organization "Save the Clear Blue Sea for the Future" and became its chairperson. NPO Save this Blue Sea for our Future Generations 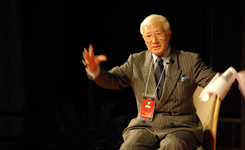 Start from a-bomb experience. Save the Clear Blue Sea for the Future