Saito was born in Tokyo. She learned violin in Paris and became the first Japanese violinist in Bach Festival in Germany. In 2004, she was chosen as the youngest ever to play in International Soloists series in Leipzig, Germany. Saito made a recital debut in All Bach Program and she was described as “Especially, her playing chaconne is a masterpiece” by BACH ARCHIV (the highest research institute of Bach). As Mr. Heribert Beissel (honorary conductor of Hamburg orchestra) appreciated her, she played as a soloist in Hamburg, Hannover, Bonn, etc., and gained much popularity. Playing as a soloist at the international music festival in Amsterdam, the Bach concert tour in Austria and Slovakia, she received attention in Europe. She also played chaconne in front of the pyramid in the memorial concert of diplomatic relations between Egypt and Japan. In 2008, she launched RYU project with famous pianist Yves Henry, and has been developing a new field of classic music, borrowing other ideas like Zen spirit. In 2010, She is going to give a concert tour titled “Pilgrimage Concert, Miracle Music” in Japan. Her current theme is “creating the art which goes beyond nation, religion, sexuality, generation, politics and all kinds of minds”. 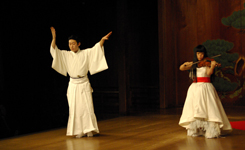