The Power of MANGA

There are lots of potential in Japanese MANGA. The potential is to express difficult and complex problems in easy understandable way. "Irrasionalness", such as war and discrimination, is still happening all over the world today. Mr. Shimizu attacks this issue by spreading the severe realities through a new media, Japanese MANGA. There are lots of potentials as a new media in Japanese MANGA, as said above. By expressing stories about exploitation, discrimination and invasion in MANGA, he aims to alert everyone about what is exactly happening in the world we live in today. In the history of human, there were great heroes who dedicated themselves to fighting with such irrationalness: Che Guevara, Mohandas Gandhi, and Martin Luther King, Jr., for those who need help, for those who are oppressed, with the power of love, courage and their strong minds, the heroes tried to save others and their rights at the cost of their own lives. By describing these heroes in a form of MANGA, the stories can be told easily and also delicately. With this power of MANGA, he attempts to deliver to many people as possible, of the way how true hero thinks, and how true hero lives. Believing the power and the potential of MANGA, he transmits his MANGA towards the world and it starts here from the stage of TEDxSeeds. 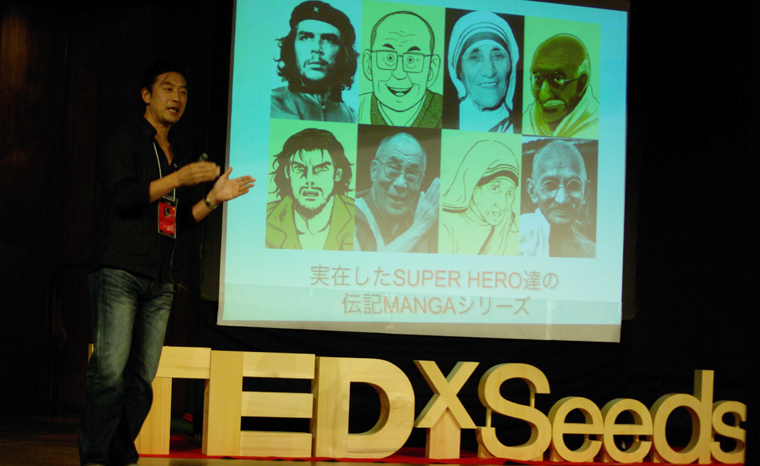