Born in 1981. He moved around in Japan many times and he enrolled Tokyo University Science major. He belonged to biological information engineering laboratory. He dropped out the medical laboratory in the same University. He was searching what he wanted to do either biology or engineering about 10 years and finally established his company, Fairly Devices Corporation. The company's goal is to help making people's hearts warm. In 2008, he created "Stellarwindow" that is a planetarium software for computers. The software is using "six axis sensor" that can calculate moving speed and distance. He is marketing the products majorly in Japan, and in Europe. In 2009, he got involved with "MITOU"(No one has been entered) that is part of IPA(Information-Technology Promotion Agency) activities. The organization is gathering talented super creator in software field to enhance their talents under talented project manager. The organization adopted "autonomy of instrument playing using sensor devices" to find and train many talented human resources. He received Super Challenger Certification that is made by Ikuo Takeuchi, a professor emeritus of Tokyo University, who was part of MITOU project manager. He now pursues extensive research in areas at the interface of machines and humans, and the measurable and immeasurable. 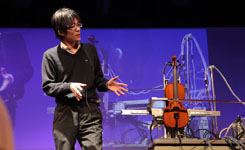 Between the measurable and immeasurable