Shimizu was born in Yokohama, 1970. He is an activist with concept “Make the World Better by MANGA Media” and the founder of Emotional Content LLC., issues worldwide "Biographic Novel" -a series of MANGA, which describes the ways of lives of heroes who had changed the world such as the 14th Dalai Lama, Mohandas Gandhi, etc. Shimizu got an MBA at Miami University and joined Sun Microsystems, Inc.. Then he returned to Japan and did business development at Recruit Inc. Although he was living full life in his own way apparently, he was hit by “Midlife Crisis” –asking himself essential questions “What am I going to be?” and “What’s the way I want to live own life”. Then he quit his job, went to U.S. again and started his current project.With his motto “Just Do What I Love”, now he is living his life twice or more happier than when he earned twice more money than he does now. Aspiring that his works will become a help to make the world more positive by creating informative, inspirational and empowering pieces, he produces a documentary movie about human rights and humanity at Wadi Rum Productions in U.S. He has been making documentary movie “Happiness”, traveling all over the world, for three and a half years. 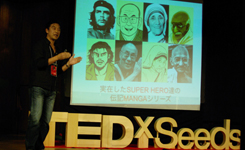 The Power of MANGA