Hajime Asama received his B. S., M. S., and Dr. Eng in Engineering from the University of Tokyo, in 1982, 1984 and 1989, respectively. He was Research Associate, Research Scientist, and Senior Research Scientist in RIKEN (The Institute of Physical and Chemical Research, Japan) from 1986 to 2002. He became a professor of RACE (Research into Artifacts, Center for Engineering), the University of Tokyo in 2002, and a professor of School of Engineering, the University of Tokyo in 2009. He received JSME Robotics and Mechatronics Award in 2009, etc. He is a vice-president of Robotics Society of Japan since 2011. He was an AdCom member of IEEE Robotics and Automation Society from 2007 to 2009. He played the director of the Mobiligence (Emergence of adaptive motor function through the body, brain and environment) program in the MEXT Grant-in-Aid for Scientific Research on Priority Areas from 2005 to 2009. He is a Fellow of JSME since 2004 and RSJ since 2008. His main research interests are distributed autonomous robotic systems, ambient intelligence, service engineering, and Mobiligence, and service robotics. 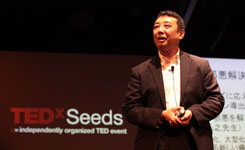