Harada was born in Akita prefecture in 1950 and started his career in NHK, Japan Broadcasting Corporation as a Video Engineer (VE) in the technical production department in 1972. In 1990, he became a chief VE for telecasting marathon in the 11th Asian Games, held in Beijing, and he mainly worked for road racing projects,In 1990, he was also assigned as a chief VE in 3D HD (High Definition) Department of the NHK Technical Services, an affiliated company of NHK on the technical division. Even though HD was little known at that time, his team developed new 3D HD technology which was first created by NHK in 80's and the first 3DHD shooting under water was successful. In 1991, his team attended the world's biggest broadcasting technology exhibition NAB Show in Las Vegas and made a 3DHD presentation called "3D Eyes through Japan". In 1995, he was back to NHK. In 2007, he was assigned again to the 3DHD department in NHK Technical Services and continues developing 3DHD technology now. Today, new 3DHD technology and footage are introduced to elementary schools as a 3DHDcaravan throughout Japan, and also 3DHD live production is used in studies of challenging area of surgical operation. His team takes advantage of the world's highest 3DHD technology in many fields, and at the same time his team's development and effort on 3DHD will never ends. 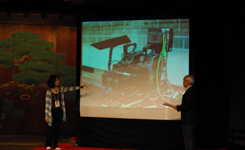