He was born in 1966 in Fukuoka, Japan. At the age of 10, he became intrigued by the mystery of galaxy and globular cluster. When he was a junior and high school student, he played baseball and boxing during the day while enjoying astronomical observation at a nearby beach at night. He went on to the University of Tokyo and started his research of primitive solar system material at the research laboratory of extraterrestrial materials. He then began his academic career at Kyushu University as a research associate, while working temporarily as a visiting scientist at NASA/JSC and MPI for Chemie. In 2001 he was promoted to associate professor, and moved to Tohoku University in 2010. He studied cometary particles recovered by the Stardust mission and found the evidence indicating large-scale transportation of materials in the early solar system. In recent years, he has been playing a leading role in the operation of opening the sample capsule and the analysis of the asteroidal samples recovered by the Hayabusa mission and uncovered formation history of asteroid Itokawa. 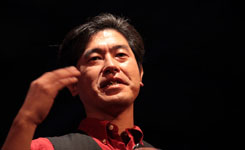 Discoveries from a piece of dust: what HAYABUSA brought back to earth